I have been thinking about this and then someone mentioned their surprise about how many earthquakes there have been in recent days. I am sharing a Feng Shui perspective. We are coming into a Metal Rat year in 2020. As I write this, the energy is rapidly approaching. Although the Feng Shui energies are not said to be ‘fully set’ until February 4th, the energies are starting to move in already. Some of us have been feeling it for a couple of weeks.

The image that you see below is the Geng Zi (Metal Rat) year pillar for 2020 that we see in a BaZi chart. 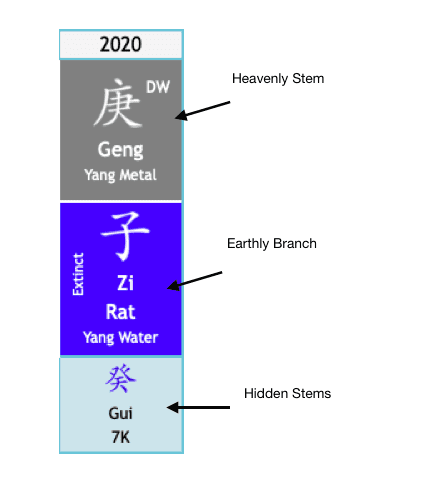 This is a color image to show you the elements that are ruling the year for the Year of the Rat. The ruling elements are Metal and Water. There is a distinct lack of Fire, Wood, and Earth elements. In the Five Elements system, there is a productive cycle in which one element ‘produces’ another. You could say one element feeds the next element or nurtures it or supports it. In the productive cycle, Metal is ‘produced’ from Earth.

When this happens, we can expect the Earth to move, shift, and adjust as it is weakened. We have an increased potential for earth-related disasters, such as earthquakes, volcanic activity, landslides, sinkholes, avalanches, mining accidents, building collapses, and flooding.

If you think you live in an area that has the potential to be impacted, it is recommended that you review disaster preparedness, insurance, and safety procedures. Better to be prepared than to be stuck. Meanwhile, we wish all the best to people around the world who are already experiencing the tragedy of loss.

Wishing that all sentient beings be free of suffering!